WRCR was conceived by a group of students in the fall of 1962. On December 20, 1962, the establishment of a radio station on campus was approved by Rockford College Board of Trustees. The Executive Board of Rockford College Student Government recognized WRCR as a communications medium on Feb. 5, 1963, and WRCR began regular carrier current broadcasting on March 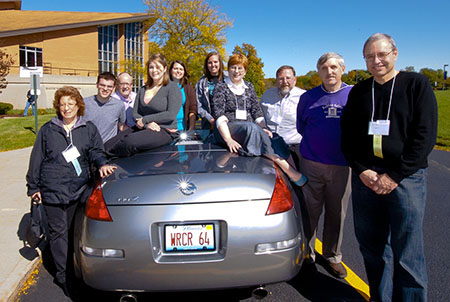 17, 1963, from room 206 in Nelson Hall. Here’s a link to an interview with one of the founders of WRCR, Eric Hansen, talking about the beginnings of WRCR.

In the Fall of 1964, WRCR moved to a larger space on the first floor of Burpee Center. Then in the Fall of 1970 the station moved to custom designed studios in the lower level of the new Burpee Center addition. In 1985 the college needed the space in lower Burpee and WRCR was again on the move. The new location was three rooms in the former Lang Infirmary. By 1993 as the college population changed from primarily residential to half-commuter student body, it became more and more difficult to staff the radio station. WRCR ceased broadcasting in the Spring of 1995. On January 21, 2011 WRCR returned as an internet stream. Click the “Rockford College Radio” button to the left to listen.

The studios for the streaming operation are back in lower Burpee Center in the old WRCR location.